Or a church I can get behind.

While I was planning the trip to New Zealand I read about Christchurch and the devastating earthquake from 2011. I knew there will be damage, because we were visiting only two years later. On the other hand, it was already two years later.

And then there was the last two weeks, travelling across both islands, taking in as much of the glorious nature as we could and not really spending much time focusing on the cities. We were barely in any, actually, and only for a little while.

So I was doubly gobsmacked upon arrival. Firstly, because Christchurch is South Island’s largest city, and definitely the largest city I’ve seen since landing in Auckland – I only saw a few of Wellington’s streets, once at around midnight, arriving at the hotel, and another time at the break of dawn, on our way to the ferry – so the transition from nature to full blown concrete jungle was drastic.

Secondly… My god, the state of that city! 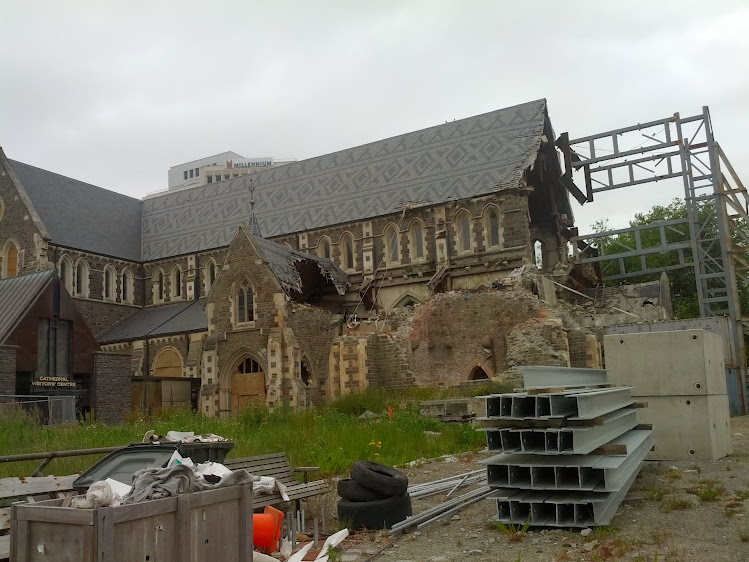 Their once beautiful cathedral… 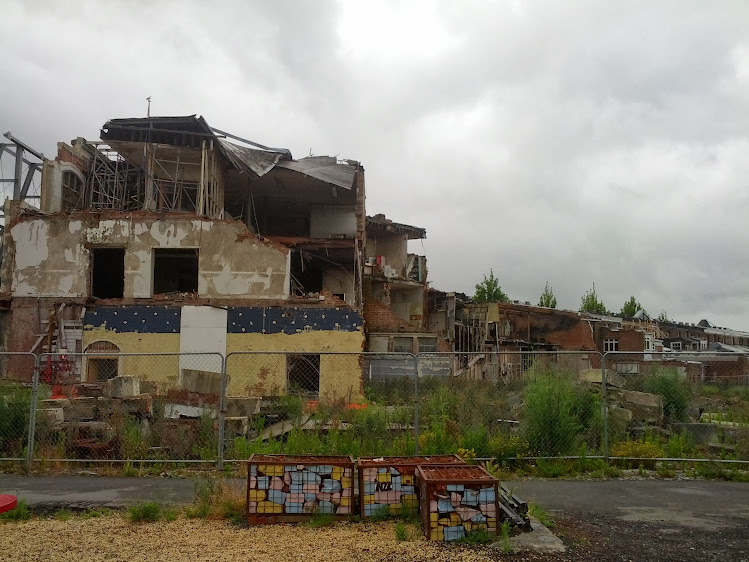 There were vast lots with semi-collapsed buildings just fenced off and seemingly forgotten. Everyone knows you couldn’t forget this, but how long until you can walk past it and not shudder inside? 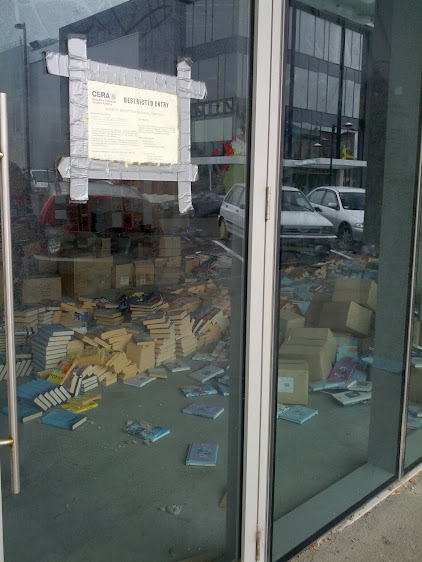 Shops, abandoned – and some full of books like the one here, which broke my heart even more – and never returned to.

Some views were not just scary and shocking, some of the places were actually disturbing – like this coffee house or restaurant, abandoned in panic, where salt and pepper shakers are still sitting on the tables as the last stubborn old rats who refuse to leave the ship, despite how the saying goes. 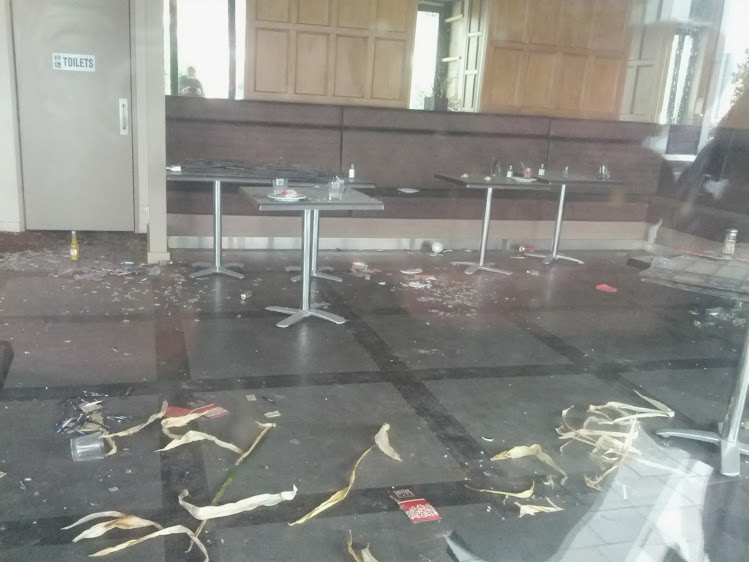 A café deserted over two and a half years ago

I literally felt I should be quiet and respectful walking down some of these streets. Which was also hard sometimes, as we kept trying to locate a pub or a restaurant we found on Google Maps, only to discover the building is not there anymore or is permanently enclosed in scaffolding to keep it from collapsing.

I was starting to feel even worse for the people of Christchurch, who not only lived through this horrific devastation, but years later still have to face the aftermath. But then something made me realise how patronising I was and how little credit I was giving the Kiwis. That something is called Re:Start and behind it is faith beyond my comprehension. 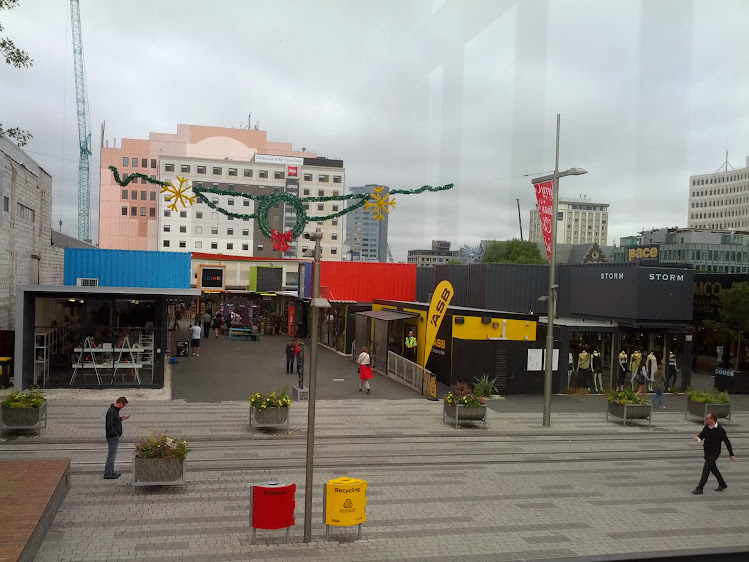 When disaster struck, tens of thousands of people lost their homes. The emergency response from the state was to provide a great number of shipping containers as temporary shelter. It might seem to you as a horrible idea, but I found it to be brilliant.

Understandably, even after the aftershocks had subsided, the people were too scared to go back indoors (even in buildings that were not affected and were deemed safe by the authorities). A lot of people chose to leave Christchurch in the months to follow, but a lot of those who stayed chose to also stick with the shipping containers – modifying them to be more comfortable, joining them together for more space. This is how Re:Start was born.

A temporary solution turned out to be a permanent answer to the 80% destruction of the central business district. Not only does it boost business – being the cornerstone of any tourist’s visit to CHC – but for me personally Re:Start showed a whole different side of the people of New Zealand. It showed me resilience, ingenuity, and most of all spirit.

And then it became so obvious to me that I couldn’t not see it in every desolate plot, in every pile of rubble – they’ve transformed almost all sad and grey looking places into a statement against defeat and against despair: 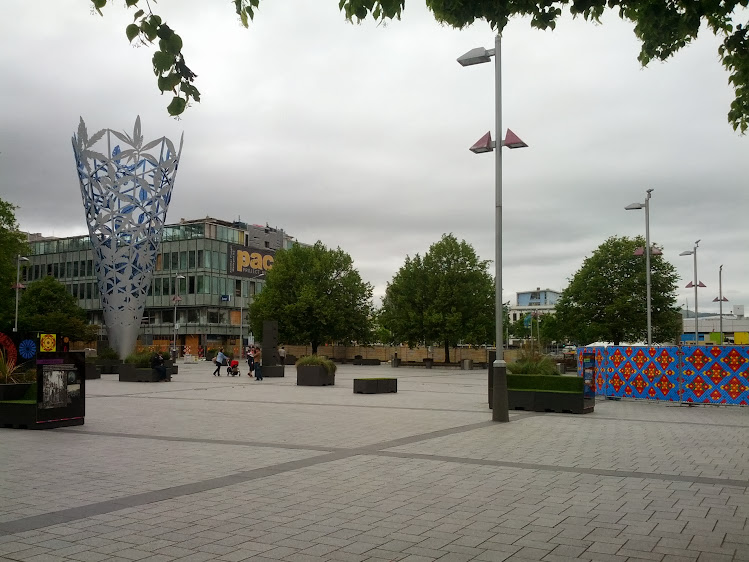 They’ve been given really sour lemons, and still managed to make some good lemonade 🙂 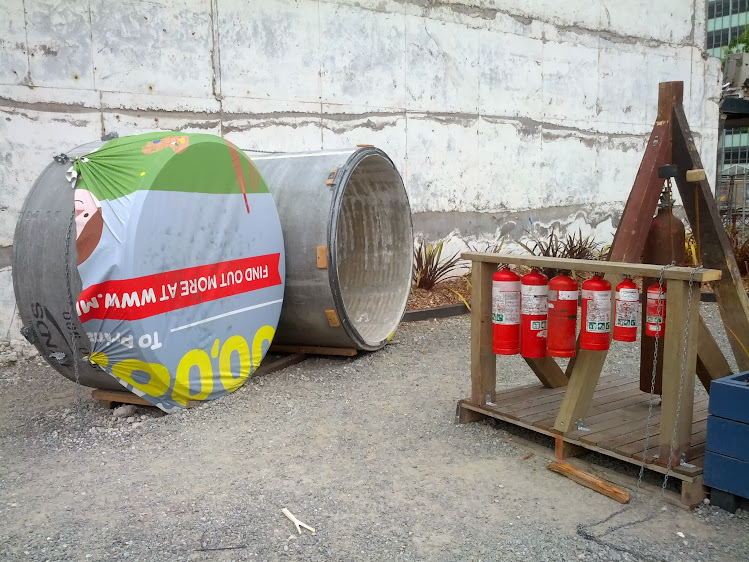 A musical playground made out of debris and construction materials.

They’ve offset the grey of concrete and the chaos of construction with bright colours and cheerful patterns.

The colourful construction fences and loos at Cathedral Square 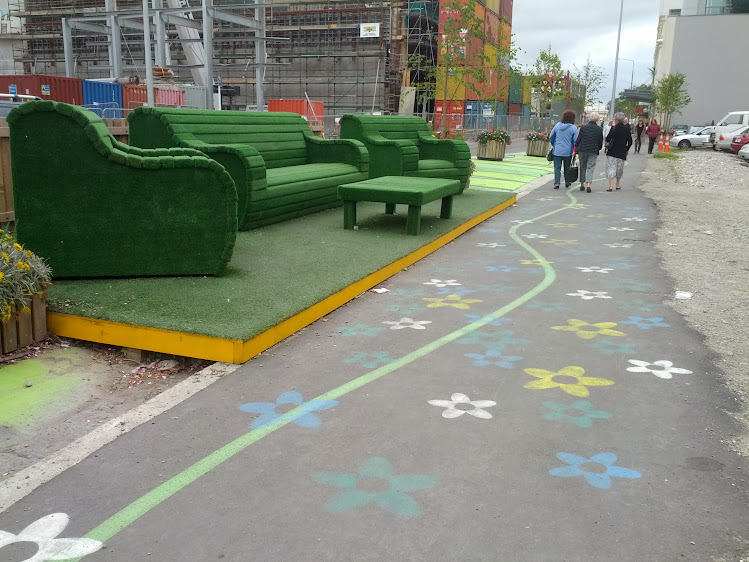 All of this, to me, shows immense strength of spirit and positivism. And also great faith. 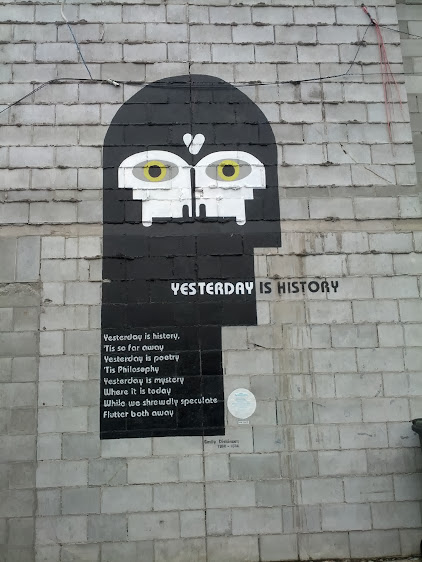 Proof that poetry is light in the darkest hours. 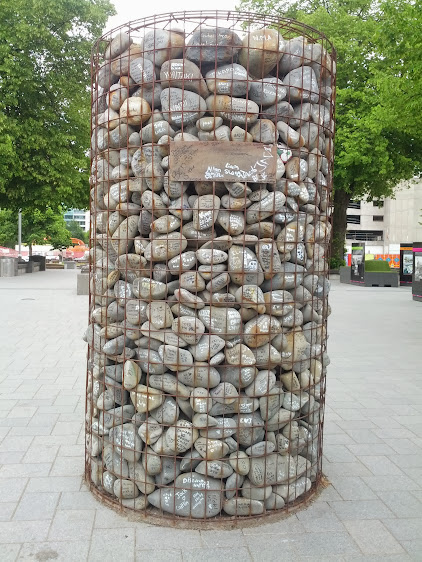 A shrine of good wishes

In the beginning of this post I mentioned  that it has nothing to do with religion – and it doesn’t – but I still feel the need to point out how important religion can be for people in the hardest of times, and for me that was most evident in the fate of the clerics from the ruined cathedral. None of them ever wanted to go back to that building – some for fear that God has abandoned the place, some for more rational reasons – but the people needed a place to congregate, to find solace in the support of their community, to pray. 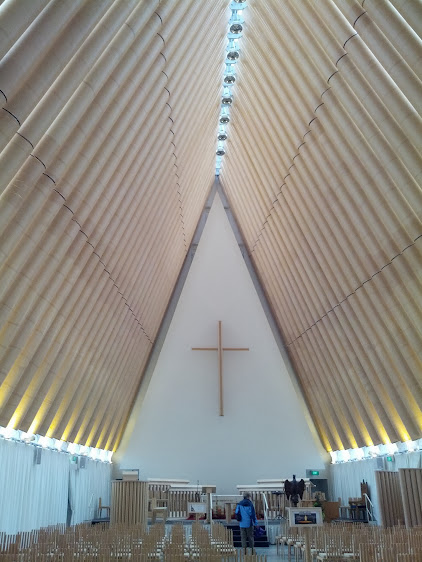 Inside the minimalistic Cardboard Cathedral

Which is why the Japanese architect Shigeru Ban designed for the people of CHC the so-called Transitional Cathedral, better known as the cardboard cathedral. Which it is.

Shigeru Ban is known for his innovative work, particularly with recycled cardboard, for quick and efficient housing of disaster victims.

The building, built in the Summer of 2013 as temporary, soon became the permanent house of worship for the locals, and is also a main attraction for visitors. Cardboard or not, I don’t see this building going away any time soon.

Another reminder of the tragedy is the 185 Empty White Chairs Memorial that symbolises the victims of the Earthquake. It’s a mobile installation that is being moved around the city, so you have to look for or stumble upon it. Either way, everyone is welcome to sit in any of the chairs for a moment of remembrance. Also, take the time to visit Quake City, it’s more interesting than you’d think.

There is so much emotion left in me from Christchurch, that I feel like I’ve been writing this post for days (when it’s only been a few hours, hah), and still I haven’t said it all.

I leave you with a couple of snaps from the Hipster Mecca of Christchurch (dubbed so by yours truly) and some very sound advice from a tree! 🙂 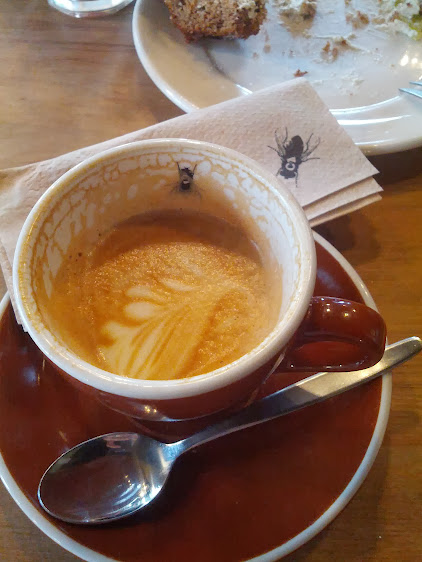 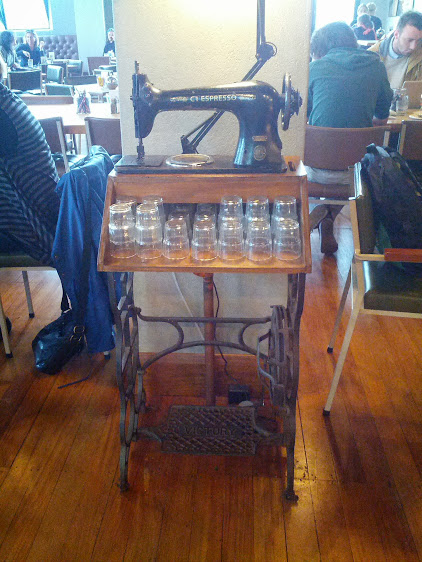 You know how many places have jugs of free water? Well, these guys have an old-timey sewing machine for that! 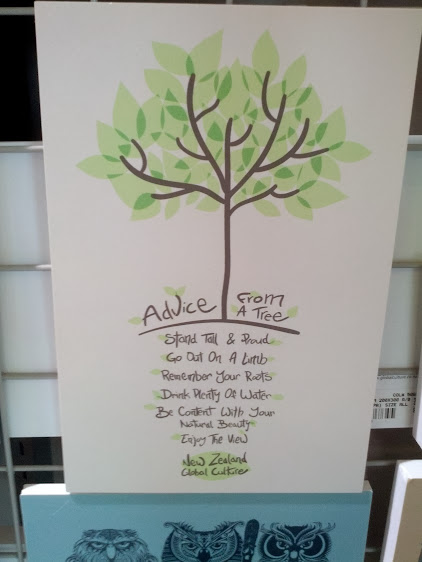 P.S.: This was the end of my New Zealand adventure and, once again, I’m sad it had to end. If you’ve stuck through the whole thing with me, thank you so much for the attention and I sincerely hope you’ve enjoyed reading about it.

Up next, there’s a whole month I spent in the USA last spring that I want to tell you about.

Yoanna is a reader, writer, traveller, concert goer, hiker, drinker, thinker and, of late... a blogger. She's currently doing a lot of travel writing (obviously), but fiction, fantasy and life-writing all have a representative in her portfolio. A reader of varied tastes, she's even been called "strange" for enjoying Stephen King and Terry Pratchett alike. In her pre-teen years, she used to be the kid who'd re-read her favourite books over and over again. Now she knows life is just too short for that. Always reading more than one book at a time, always writing more than one project at a time, she is yet to find her perfect pace. But she's working on it!
View all posts by Yoanna Novakova →
This entry was posted in New Zealand, Travel and tagged #cardboardcathedral, #cathedral, #christchurch, #destruction, #earthquake, #faith, #hipsters, #memorial, #monument, #naturaldisaster, #newzealand, #restart, #revival, #southisland, #urbanisation. Bookmark the permalink.

3 Responses to The Church