Let’s start with some Big Magic!

I know I’m only a month and half late with that last thing and well over a month late with my next blog post… but this is how it is in my little world of procrastination. I’ve vowed that one day I’ll get the hang of this regular posting thing but until then I just have to keep trying, now don’t I?

And just so that I don’t stop at “I’m one big lazy ass” I have to mentioned that I have been reading and working on my own book in the past month and progress has been made. 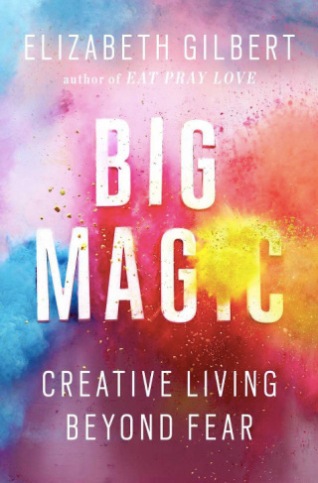 Example number one: after finishing a couple of books I had started in 2016, a couple of weeks ago I finished Elizabeth Gilbert’s Big Magic: Creative Living Beyond Fear. Now, after a sick spell and some guests, I finally sit down to finish this review/reflection on it.

I first discovered Elizabeth Gilbert not through Eat, Pray, Love – it might come as a shock to some but I still have neither read the book nor seen the movie – but through her podcast “Big Magic”. In fact, that’s how I learned it was she who wrote Eat, Pray, Love and, even if as reader and writer I should be, I am totally not ashamed to admit that.

Anyhow, I enjoyed her podcast and the people she called for advise had some very interesting things to say to aspiring artists of all fields. So I thought I’d give the book a try.

I also opted for the audiobook since I was already used to Gilbert’s voice from the podcast. I don’t have a great amount of experience with audiobooks, but from the little that I have, I’d say non-fiction is best when read by the author. Not just in this case, when I already know the author’s voice but I also had a great experience with Kate Mulgrew’s Born with Teeth (which for some reason I have not reviewed, hmm?)

So, typically, it’s a great deal to have the author read the work herself, and in this case, there might have been a good dose of saving grace in that voice. Only that sweet, fairy-tale-telling voice saved the narration during some passages of sappy romanticising and faux naivete. Don’t get me wrong, I’m all about the romantics of being a writer – the cradling of a glass of wine in search of the right tone for this scene, switching to whisky when you’re stuck on a pivotal point in your story, drinking one too many coffees because you’ve forgotten how many you’ve had already or simply tucking in with someone else’s book and a huge cup of tea as a consolation when inspiration just doesn’t strike or a reward when you’ve met your daily goal. Apparently, beverages are an intrinsic part of being a writer :))

And that last part leads me to the debunking of Gilbert’s idea that “you should try, since it compels you, but if doesn’t work, well… the odds are rarely in our favour so move on and be happy with the fact that you’ve tried” (not a direct quote). It sounds very sweet and supportive in a forgiving motherly way, but any writer who has ever produced any non-trivial sized piece of work from a creative dissertation to a novel knows that sitting around waiting for inspiration will only get you so far. If you don’t put in the hours and the physical effort of putting actual words on an actual page (or file), you can have the most inspired idea in the world but it will remain just that – an idea. And I’m sure Liz Gilbert knows that, having written more than one book herself, so it was surprising not to hear her advocate more for persistence and honing your craft rather than just giving it a try.

Speaking of honing your craft, as a person who has a master’s degree in Creative Writing, I have to strongly disagree with Ms Gilbert’s position on higher education in the arts. Kudos to her extremely talented autodidactic painter friend who is now teaching painting himself (ironic, no?), but there have always been and always will be extremely talented people who, against all odds and under the worst of circumstances, create spectacular work and their existence does in no way negate the need of other people to be taught.

Of course, doing a course – a two month or a two year one – with the idea that you’ll come out at the other end as a well-rounded author is ludicrous. But that would be the same as thinking that “winning” NaNoWriMo means you have a finished book in December. Of course you don’t! Use you’re damn common sense.

However, just as coming out at the end of November with 50,000 words more to your project is a huge step forward, going to uni and learning structure, basic rules and in-depth analyses of writing, and (mostly, imho) getting some feedback on the spot from professionals and peers is of great use and a big advantage once you try tackling that elusive project. It doesn’t have to be a game of trial and error that might take years to yield something usable. I’m not saying you’re prepared for everything, surely you’re not, but you could have a better inkling of what you might be doing right or wrong. In short, I support the idea that no skill or rule or trick pertinent to your craft would be superfluous or not worth acquiring. The channel or media through which you might learn said skill or rule or trick is irrelevant.

An interesting line of thought that Gilbert follows at one moment is the notion that the creative idea is a living thing in search for a host and if you’re not playing good host for your idea it will eventually leave you and move on to someone else. I definitely agree that there are some things that don’t keep well over time and even more that the chance that you would be the only person to ever come up with this precise idea is very slim. It’s been millennia since the human race has begun creating art and even though evolution and the advancement of knowledge constantly open new doors for us, there are only so many paths that these doors might lead us to. Much like The Seven Basic Plots explains, there are only so many story lines that you can have, but it’s all about how you play it out.

What I took from Gilbert’s way of putting this is that if you feel/know/suspect you’ve been visited by the proverbial muse and have a great idea about, let’s say a book, it’s up to you to pursue and realise that idea. Because ideas, not unlike dreams, tend to fade the longer you wait to elaborate on them after they happen. Also, the longer you wait, the bigger the chance for someone else to get to that same idea or, as per Gilbert, for the idea to move on to someone else.

I started off with the few points that left me underwhelmed as far as inspiration and validation goes, but I would not consider the experience of Big Magic a bad one. If anything, it was several pleasant hours of having a very soothing, very laid back companion around.

There are many more examples of the author’s own quirky perspective on how you should treat your inspiration and what little steps you should take towards embracing your creative self – from treating it like a steamy love affair in a stairwell to sitting opposite a loaded gun (that last simile might not have made an appearance, but you get the idea). Her way of looking at things might not be everyone’s cup of tea, but if you keep an open mind and suspend your judgement for a while, you might just extract what you need to move your creativity forward, you might just find a little big magic for yourself after all.

Yoanna is a reader, writer, traveller, concert goer, hiker, drinker, thinker and, of late... a blogger. She's currently doing a lot of travel writing (obviously), but fiction, fantasy and life-writing all have a representative in her portfolio. A reader of varied tastes, she's even been called "strange" for enjoying Stephen King and Terry Pratchett alike. In her pre-teen years, she used to be the kid who'd re-read her favourite books over and over again. Now she knows life is just too short for that. Always reading more than one book at a time, always writing more than one project at a time, she is yet to find her perfect pace. But she's working on it!
View all posts by Yoanna Novakova →
This entry was posted in It's been on my mind. Bookmark the permalink.